"fuck off American. you don't know what Germans listed to 20 years ago."
You are using an out of date browser. It may not display this or other websites correctly.
You should upgrade or use an alternative browser.

What i need to say this is that i'm getting some report from the guy who know the guy named darkherobrine99 or don_scarlia on twitter.

First off, someone showed me a information about a innocent guy named JimFuriousTweet.

When i read this, i might even notice that darkherobrine99 has threatened and harassed JimFuriousTweet. the line "THIS ASSHOLE @JimFuriousTweet NEEDS TO BE BROUGHT IN PRISON FOR STALKING, THREATENING INNOCENT PEOPLE AND OTHERS" was meant to attack that innocent man. Jimfurioustweet is COMPLETELY innocent, and darkherobrine99 is being a lunatic to attack him.

Now, I will show you a proofs of him harassing anyone who is the tweet. I contacted Twitter about it, and he give me permanent access to Don_scarlia.

this one is actually a harassment.

Darkherobrine99 want his white knights to take down the private document.

Only Kaizer I know is Soze
Reactions: FatFuck, Slidey Boi and 【ＶＯＩＤ】

I searched and found this: 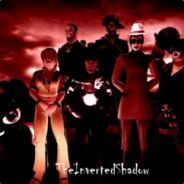 To those that claims that darkherobrine99 is a "nice guy" or is "the prince of EOI" then do not belive it, he is a model stealing little prick that STOLE the EoI models that TheInvertedShadow (TIShadster) owns and then claims them as his own. And for some stupid reason people think...

steamcommunity.com
archive.ph
According to this post he stole models and videos from other youtubers. 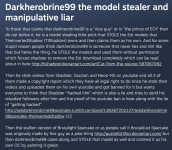 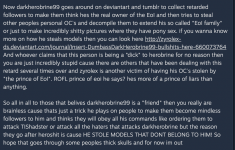 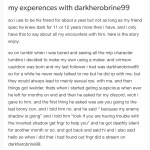 They did sexual rps together. 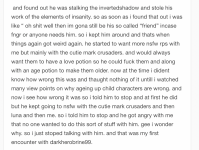 There are pedophile accusations against darkherobrine99. 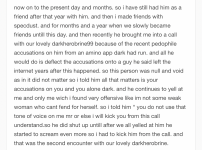 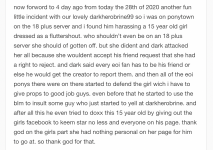 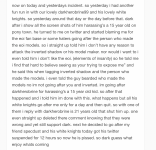 somewhere over the rainbow

Sounds like a personal army request to me.
Reactions: FatFuck and naught

Not your personal army. No one is going to report anything for you here. We're here to laugh at freaks.
Update:Darkherobrine99(don_scarlia) is causing drama and started to threat someone who know darkherobrine99's past.

It doesn't have to be. I looked into darkherobrine last year. He's a genuine cow but he also has a ton of alogs and crusaders especially on twitter. When I was looking into him I found people who had been arguing about him (not even with him) for years. He's a real weirdo.