I am not sure the gunt is interested.
You are using an out of date browser. It may not display this or other websites correctly.
You should upgrade or use an alternative browser.

I saw this on Kiwifarms and thought it was pretty funny so I am uploading it here: Lolcow uprising with Ethan Ralph, Baked Alaska, and Nick Fuentes.

I, for one, wish them all the luck in the world. A groyper V kiwi battle royale sounds entertaining.

zilch said:
Daddy Jim is back!
After Mister Metokur and PPP had their dispute over New Project 2 backed by Dick Masterson on stream a year ago all seemed lost with no interaction between the two for a year. Yet it seems the pair has reconciled and appeared on the Kino Casino (which could be awkward given PPP's association with KingOfPol).

After years of Gunt Guarding 2 months ago Ethan Ralph turned on Mister Metokur and the two got into a hollering match.

Ethan Ralph accused Mister Metokur of "targeting" when all Metokur did Was laugh at him getting beat up in Portugal after taunting the locals.

This ties into the GUNTERBALL EXTRAVAGANZA stream which led to Mister Metokur going on The Dick show (the funny bit being Dick is Cunt capo).

In a recent stream Mister Metokur vs Nick Fuentes the latter Catboy party took issue with Mister Metokur streaming with a Documentary maker named porsalin, in the same stream with Fuentes Baked Alaska confronted Mister Metokur he admitted to being mad about Metokur calling baked a grifter faggot 4 years ago. ironic since Ralph made a huge comeback off of Baked Alaska spiraling out of control yet now the cows have reconciled and declared a lolcow uprising with Nick Fuentes.

For anyone unfamiliar Jim81Jim, internet aristocrat, or Mister Metokur He did a lore stream on bis various internet pereonas throughout the years.

if you miss any of the live streams check the archive channels.

On 11 April, the Sudanese military removed Omar al-Bashir from his position as President of Sudan, dissolved the cabinet and the National Legislature, and announced a three-month state of emergency, to be followed by a two-year transition period.[9] Lt. Gen. Ahmed Awad Ibn Auf, who was both the defense minister of Sudan and the Vice President of Sudan, declared himself the de facto Head of State, announced the suspension of the country's constitution, and imposed a curfew from 10 pm to 4 am, effectively ordering the dissolution of the ongoing protests.[10] Along with the National Legislature and national government, state governments and legislative councils in Sudan were dissolved as well.[11]

State media reported that all political prisoners, including anti-Bashir protest leaders, were being released from jail.[10] Al-Bashir's National Congress Party responded by announcing that they would hold a rally supporting the ousted president.[12] Soldiers also raided the offices of the Islamic Movement, the main ideological wing of the National Congress, in Khartoum.[13]

On 12 April, the ruling military government agreed to shorten the length of its rule to "as early as a month" and transfer control to a civilian government if negotiations could result in a new government being formed.[14] That evening, Auf stepped down as head of the military council and made Lt. Gen. Abdel Fattah Abdelrahman Burhan, who serves as general inspector of the armed forces, his successor.[15][16][17] This came following protests over his decision not to extradite Bashir to the International Criminal Court.[15][18] The resignation was regarded as a "triumph" by the protestors, who were overjoyed.[19][20] Burhan is considered to have a cleaner record than the rest of al-Bashir's generals and is not wanted or implicated for war crimes by any international court.[20] He was one of the generals who had reached out to protesters during their week-long encampment near the military headquarters, meeting with them face to face and listening to their views.[20] 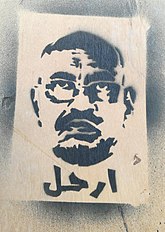 Anti-Omar al-Bashir revolutionary street stencil in Khartoum.
Despite the imposed curfew, protesters remained on the streets.[21] On 13 April, Burhan announced in his first televised address that the curfew which had been imposed by Auf was now lifted and that an order was issued to complete the release of all prisoners jailed under emergency laws ordered by Bashir.[22][23] Hours beforehand,[22] members of the ruling military council released a statement to Sudanese television which stated that Burhan had accepted the resignation of intelligence and security chief Salah Gosh.[23][24][25] Gosh had overseen the crackdown of protestors who opposed al-Bashir.[23] Following these announcements, talks between the protestors and the military to transition to a civilian government officially started.[25]

In a statement, several Sudanese activists, including those of the Sudanese Professionals Association and the Sudanese Communist Party, denounced the Transitional Military Council as a government of "the same faces and entities that our great people have revolted against". The activists demanded that power be handed over to a civilian government.[3][26] On 12 April, Col. General Omar Zein al-Abideen, a member of the Transitional Military Council, announced that the transfer of Sudanese government to civilian rule would take place in "as early as a month if a government is formed" and offered to start talks with protestors to start this transition.[14] On 14 April 2019, it was announced that council had agreed to have the protestors nominate a civilian Prime Minister and have civilians run every Government ministry outside the Defense and Interior Ministries.[27][28] The same day, military council spokesman Shams El Din Kabbashi Shinto announced that Auf had been removed as Defense Minister and Lt. General Abu Bakr Mustafa was named to succeed Gosh as chief of Sudan's National Intelligence and Security Service (NISS).[29][30][31]

On 15 April 2019, Shams al-Din Kabbashi announced that "The former ruling National Congress Party (NCP) will not participate in any transitional government".[32][33] Despite being barred from the transitional government, the NCP has not been barred from taking part in future elections.[32] Prominent activist Mohammed Naji al-Asam announced that trust was also growing between the military and the protestors following more talks and the release of more political prisoners, despite a poorly organized attempt by the army to disperse the sit-in.[34] It was also announced that the military council was restructuring, which began with the appointments of Colonel General Hashem Abdel Muttalib Ahmed Babakr as army chief of staff and Colonel General Mohamed Othman al-Hussein as deputy chief of staff.[35]

On 15 April,[36] the African Union gave Sudan 15 days to install a civilian government.[37] If the ruling military council does not comply, Sudan will be suspended as a member of the AU.[38] On 16 April, the military council announced that Burhan had again cooperated with the demands of the protestors and sacked the nation's three top prosecutors, including chief prosecutor Omar Ahmed Mohamed Abdelsalam, public prosecutor Amer Ibrahim Majid, and deputy public prosecutor Hesham Othman Ibrahim Saleh.[39][40][41] The same day, two sources with direct knowledge told CNN that Bashir, his former interior minister Abdelrahim Mohamed Hussein, and Ahmed Haroun, the former head of the ruling party, will be charged with corruption and the death of protesters.[38] On 23 April,[42] the AU agreed to extend the transition deadline from 15 days to three months.[43]

On 24 April, three members of the Transitional Military Council submitted their resignations.[44] Those who resigned included political committee chair Lieutenant-General Omar Zain al-Abideen, Lieutenant-General Jalal al-Deen al-Sheikh and Lieutenant-General Al-Tayeb Babakr Ali Fadeel.[45] On 27 April, an agreement was reached to form a transitional council made up jointly of civilians and military, though the exact details of the power-sharing arrangement were not yet agreed upon, as both sides wanted to have a majority.[46] The military also announced the resignation of the three military council generals.[47]

Dozens of women were raped on 3 June 2019 by Sudanese security forces and at least 87 people were killed by Rapid Support Forces (RSF) and other troops tore apart a sit-in camp Khartoum.[48]
Click to expand...